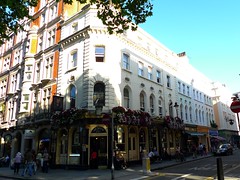 Spirit Group pub in Bloomsbury, just across the road from the British Museum.

Given its location, it's a bit of a tourist magnet, and indeed there are various signs around the place pointing out that this "real ale" stuff is also known as "bitter" or "English beer". The decor is fairly traditional, with frosted glass windows and small privacy screens, as well as carpeting in half the pub. Tables are mostly for four people, and there's some outside seating as well.

Kake, Ewan, and friends visited on a Tuesday afternoon/early evening in September 2009. There are seven handpulls, which on our visit had London Pride, Abbot Ale, Doom Bar, Tribute, Brains Honest Ale, Brew Dog The Physics (£1.65/half) and Brewster's Decadence. There was also a cask of Thatcher's golden cider behind the bar. Draught lagers include Staropramen and Hoegaarden, and Scrumpy Jack is also on tap. Service was (quite understandably) efficient and somewhat detached.

Food is served at least lunchtimes and evenings, according to the 2010 Good Beer Guide. The menu is a standard Spirit Group one photo. We tried the nachos (£9) photo, which were fine, though the use of some kind of cheese sauce rather than actual cheese did give us pause at first.

Accessibility: A small ramp sort of thing (a smoothed-over step) to get in. Toilets are down a flight of stairs. There's no much room to move about inside.