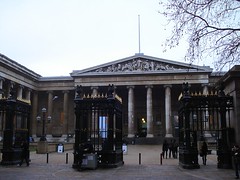 A museum of human history and culture (or a collection of colonial loot, depending on your point of view) located in Bloomsbury. Entry is free, though donations are solicited via prominent signs in the entry.

Founded in 1753 from the private collection of Sir Hans Sloane, it now includes eight million objects from around the world. While some of them (e.g. the Elgin Marbles and the Rosetta Stone) are the subject of controversy over whether they should remain in the museum or be returned to their country of origin, others originate from London itself, including the head of a larger-than-life bronze statue of the Roman emperor Hadrian, dating from the second century AD and discovered in 1834 in the Thames near London Bridge.

Due to the sheer size of the holdings, it's almost impossible to get an overview of the collection in a single visit. A planning your visit page on the website offers suggestions for those who have an hour to spare, three hours to spare, or children in tow — but tours and talks (some free, some pay-for) are also available, and the website is pretty comprehensive and sensibly-navigable if you prefer to plan your own visit.

In January 2010, Kake had a bash at seeing how easy it would be to just turn up at the front door without knowing where anything was (and without paying £2 for a map in the gift shop), and found that the signage was pretty good, with "you are here" maps at strategic points. I did get briefly lost once or twice, while I was trying to find my way from the Romans In Britain gallery to the Greek And Roman Life one, but the layout is reasonably linear so it was easy to backtrack.

The central location and free entry mean that it's very popular with tourists, so be prepared for noise and camera flashes. Presumably for the same reason, signs outside warn that bags sized more than 40cm by 40cm by 50cm may neither be brought in nor left at the cloakroom.

Accessibility: A flight of steps up to get in at the south (Great Russell Street) entrance, though there's a lift at each side to bypass these photo (according to the website, these are "self operable ... with bells for visitors to call for assistance if required"). There are lifts to the galleries on the upper floors, most if not all of the galleries have relatively spacious aisles, and wheelchairs are available to borrow. The access page on their website is fairly comprehensive.