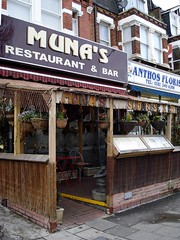 Muna's was a Sudanese and Eritrean restaurant in Harringay, a few minutes' walk from Turnpike Lane Station. It closed in early 2012. As of May 2012, Harringay Online reports that a "live music restaurant/bar" is due to open on the premises in July 2012.

The information below is retained for people who want to know what Muna's used to be like.

Sudanese and Eritrean restaurant in Harringay, a few minutes' walk from Turnpike Lane Station on the Piccadilly Line.

Kake visited with doop and secretlondon on a Sunday evening in January 2008. It was empty when we arrived around 6pm, though a half dozen other customers turned up while we were there.

We chose the meze option (£18/head), which let us sample a number of dishes from the menu. The owner, Muna, came over to ask us whether there was anything we don't eat (there isn't). I did ask whether the raw beef dish I'd spotted on the menu could be included in the meze, but Muna said no since she didn't think we'd like it (and I didn't feel up to arguing).

The meze was good, though. We opted to have it served the traditional way, on a round of injera (a sour flat bread similar to a thin pancake) with more injera on the side to pick the food up with. Particular highlights were the fish stew (lovely and tender, neither undercooked nor overcooked), the aubergine salad (baba ganoush style) and the chilli (well-flavoured albeit not very spicy-hot, good texture to the meat) photo.

We finished with the ceremonial coffee (£10); freshly roasted and ground coffee beans flavoured with cardamom and served in a traditional coffee pot photo. Once the pot is empty, Muna adds more water and brews it again, and this is repeated as many times as you like, with the flavour of the coffee changing on each brewing.

We will come back, I think, and will be more assertive about the raw beef next time. The Chowhound thread linked below suggests that how much you enjoy your experience here depends on how well you and Muna get on; so come prepared for a conversation.