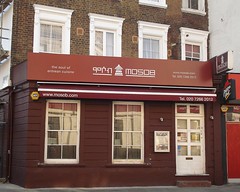 The menu offers traditional Eritrean food, based around various stews served on injera, a fermented spongy flatbread/pancake. As Eritrean cuisine has a long tradition of vegetarian/vegan food (due to Orthodox Christian fasting days), so the menu at Mosob has plenty of clearly-marked vegetarian options as well as three vegetarian set menus, one of which is vegan. A note on the menu states that all their meat is halal.

It's not a large space, seating 35 in the main room and 20 more in a small lounge at the back. There are also three stools at the bar. Seating in the main room is standard chairs and tables, while the lounge has a combination of banquettes and low stools.

Kake and friends visited on a Thursday evening in March 2012. We'd booked in advance, and were seated in the lounge along with another, larger group. It got quite warm in there with the small room so full, to the point where the other party were taking things down from the walls to fan themselves with, and also noisy to the point where it got a little hard to hear what one's companions were saying.

We decided to go for a couple of set menus to share, one meat-based and one vegetarian. Both of these came with a mixed starter plate of spinach rolls, timtimo (spicy lentil) rolls, and felafel photo along with two dips: awaze (spicy chilli paste) and yoghurt with olive oil. The felafel were well-flavoured and well-textured, and the olive oil served with the yoghurt was good quality.

Massawa set menu (£34 for two people) photo including extra order of quanta fitfit included zigni (lamb stew), derho quluwa (chicken sautéed with mixed peppers), alicha ahmelti (cabbage with carrots and green beans), and timtimo (spicy lentils); since there were three of us sharing this instead of two, we also added an order of quanta fitfit (stewed dried beef mixed with strips of injera; £10). The derho quluwa seemed like a rather standard sort of stirfry, but the zigni was delicious, and the quanta fitfit was really good too (definitely the hottest dish as well). The alicha ahmelti had a slightly sour/vinegary taste which made a good counterpoint to the spices in the meat dishes and lentils.

The Keren vegetarian set menu (£29 for two people) photo included hamil mis ajibo (spinach with cottage cheese), kik (spicy split peas), bamia (okra with tomato, garlic, and cumin), alicha ahmelti (cabbage with carrots and beans), and a lettuce and tomato salad. The kik was pretty good; the split peas weren't "bitty" at all. The flavours of the okra dish were perhaps a little unbalanced.

Both set menus were served on injera, and we were provided with plenty of extra injera on the side to scoop up the food; this was replenished when we ran out. The injera was pleasingly sour, noticeably more so than the blander versions we've occasionally had elsewhere in London.

Our set menus also included tea to finish; a choice of mint tea or spiced tea, served in metal teapots along with tiny glasses. The mint tea was made with fresh leaves and was lovely, as was the black tea (spiced with cardamom and ginger, we were told).

Service was very friendly, but it took quite some time to get their attention to order a second round of drinks.

Kake's verdict: I was one of the people eating the vegetarian set menu, and I was a little disappointed with it. If I came back I'd probably order meat. I was also not too enamoured of the service, which seemed a bit "now we will tell you how to enjoy yourself" to me, but others liked that aspect, and this is more of a personal preference than a real criticism.