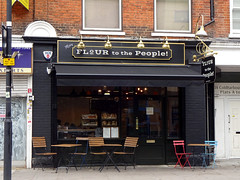 Cafe and bakery in Camberwell. It opened in June 2019. It does breakfast/brunch during the day, and pizza in the evenings.

Entry is into a seating area filled with large mismatched wooden tables, flanked by school-style tube-framed chairs to seat around 30 people. Beyond this, a pewter-topped service counter separates off a similarly-sized space dominated by a huge bread oven. A toaster sits on each table, ready for use in their unlimited "toast your own" offer.

The floor is a mix of brown lino, varnished wooden blocks, and decorative mosaic, while walls are white paint above glazed green tiles. A column of exposed brick rises to the ceiling above an old fireplace on one wall, echoed by more exposed brick in the back section behind the service counter.

Kake visited on a Thursday lunchtime in October 2019. There were four other customers when I arrived around 12:30pm, and several more turned up while I was there. Peaceful music was playing quietly.

Eggs florentine (£8.50 on the menu but £9.50 on the bill) photo were advertised as coming on crumpets instead of the usual muffin. The crumpets were somewhat muffin-like, though on careful examination they did have the internal channels characteristic of crumpets. They were good quality, just not as much of a change from the usual as I'd expected.

The eggs were good, with runny yolks and properly set whites, and the spinach was also well-handled — cooked just right and not gritty at all. The hollandaise was fairly subdued, to the point where I didn't really notice much about it.

Decaf breakfast tea (£2.50) was oddly musty-smelling and -tasting, but when I reported this they replaced it with a pot of lemon tea, which was fine.

Service was fine, and a carafe of tap water was brought to my table without me having to ask. A 12.5% service charge was auto-added to the bill, despite the presence of a tip jar by the till.

All the tables except the one in the centre of the room have at least two plug sockets next to them at table-height, and there's free WiFi (ask staff for the password).

Accessibility: No steps to get in, but the toilet is in the basement, down a very narrow and tightly-coiled spiral staircase.