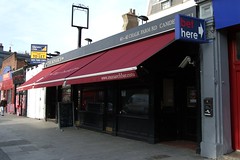 The Monarch was a large pub and gig venue in Camden, on Chalk Farm Road. It closed down in February 2020.

Large pub and gig venue in Camden, on Chalk Farm Road. Not to be confused with the old Monarch (now the Barfly) a couple of doors down the road, this building used to house the Man In The Moon branch of Wetherspoon's in the late-1990s and early-2000s.

It can get extremely busy in the late evening, but for a post-work pint it's actually quite civilised compared to similar establishments in the area.

The front third of the pub is often transformed into a small stage for bands and DJs, with enough room to dance in front of it. The middle third of the room (down a couple of steps) has a pool table, with more seating there and in the back third (which is back up the steps again). At the back there is access to a sheltered beer garden (down a large step), with several tables and benches for smokers. Thanks to some strategic partitions, it is possible to hear yourself think in this back section even if there is a gig going on at the front.

Kat has visited on several occasions; there has usually been at least three handpumps available for real ale (all under £4/pint as of May 2014), with a couple of Shepherd Neame beers. There is also a decent range of keg beers and American bottled beers in the fridge. A chalkboard to the side of the bar lists all the available beers on pump and keg, with their prices. A basic pub menu is served all day (until 8pm on Sundays).

As of 2014 there are also semi-regular quiz nights held on Mondays (booking recommended). Kat can confirm that the Twin Peaks themed quiz was fairly difficult.

Accessibility: Toilets are up a flight of stairs. The website states that the management are happy to make alternative accessibility arrangements with a few days' notice.