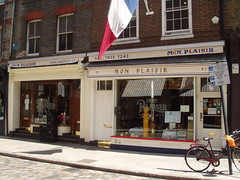 Inside, the restaurant is a cosy little warren of passages, with tables in two rooms adjoining the front windows, as well as more up steps at the back. Getting between the rooms leads you through the tiny service area. Service is attentive as you'd expect.

When Ewan visited with some friends, he was given a complimentary glass of champagne. As it was early in the evening, the pre-theatre set menu (£13.50 for two courses, £15.50 for three) was available. The choices were limited to a couple of starters, a couple of mains and a couple of desserts, and each of us went for the same options. A chilled leek and potato soup (velouté glâcé) photo was tasty, and despite the big glob of cream on top with croutons, was not at all overly creamy. The main of pearl barley risotto with broad beans and tomato photo, though not large, quite defeated me, and the complimentary bowl of frites on the side photo were barely started upon, despite being rather good.

Kake has eaten here a few times, though not recently. Very good food; traditional French bistro style rather than ultra-modern, but done very well. I've particularly enjoyed the steak tartare and also the frites (very thin, very crisp, not at all greasy). The cheeseboard is particularly great; they bring out a huge board covered with many kinds of cheese, ask you what you like in a cheese, and pick out three or four types for you.

The wine list is also very good, according to those who know about such things. Wines are available by the bottle, though some are also served in 250ml or 500ml carafes. A merlot was perfectly drinkable.

The website advertises a four-course regional set meal (around £30) on the second Monday evening of every month; I don't know if this is as well as or instead of the regular menu.

Ewan's verdict: For the area, this is startling good value. The menu isn't flashy or exciting, but it sticks to French basics and does them perfectly well.

Accessibility: It's a very small, cramped space. Toilets are down some narrow stairs.