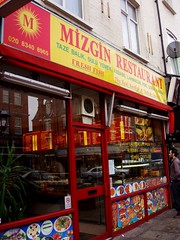 Mizgin was a Turkish and Kurdish restaurant in Harringay. It has now closed. As of early 2013 the premises are occupied by another restaurant called Devran.

Fairly unprepossessing restaurant and takeaway serving Turkish (and Kurdish, according to the signage) food on Green Lanes, Harringay.

Ewan and Jo visited on a Monday Bank Holiday lunchtime in March 2008. Not being connoisseurs of Turkish cuisine, we really didn't know what to look for, and in an area such as this, there's no shortage of options. This place has the usual takeaway counter for kebabs and the like, but also plenty of seating with a rather disconcerting mirrored strip running around all the walls.

At lunchtime on a public holiday, there were quite a few people in here, and being hungry we went in. One waitress provided table service in an efficient manner, and we were quickly able to order. The menu isn't long, with only a single vegetarian option (kebab) and most mains are in the range of £6-7.

When we ordered, the waitress insisted on us having a vegetable stew rather than the listed kebab. This came with rice and a dollop of yoghurt, and was perfectly good (though not particularly heavily flavoured).

The starter we chose was a lovely plate of hummous with tasty Turkish bread (£3, Flickr photo), and when we'd finished our bread (not so difficult, really, as it was light and warm) we were offered more. We were also brought a plate of salad, well dressed and tasty, which went down very quickly also.