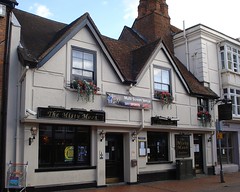 It used to be a Wetherspoons, and hints of this can still be seen in the interior, with a number of booths along the back wall. The shape of the space (low ceiling, room stretching back from a smallish frontage) is characteristic of the Wetherspoons shop conversion — in this case, the building used to be a post office — but a couple of skylights towards the back ensure that natural light still penetrates. Pillars and partitions break up the space to give an almost cosy feel in places.

The decor is updated traditional, with the familiar patterned carpet and dark varnished wood, but also a more contemporary textured striped upholstery on the banquette seating. Old photos and prints are on the walls; some generic, some more localised, for example a small display of photos relating to Chesham Station when it first opened around the end of the 19th century.

Kake first visited on a Thursday afternoon in October 2009. Five of the six handpumps were on, offering Tring Side Pocket (£1.35/half), Courage Best, London Pride, Abbot Ale, and a cider. When I arrived around 3pm, there were about 15 people in, women as well as men, and a good buzz of conversation. Music was playing (rock and indie). The flatscreen above the bar was showing cricket with the sound off.

On another visit on a Wednesday lunchtime in September 2015, there were a fair few people in around 1pm, and a good buzz of conversation. Music was playing, fairly poppy, not too loud. Again, five of the six handpumps were on, with Abbot Ale, Shepherd Neame Bishops Finger, Bombardier, Courage Best, and Greene King IPA. A pint of lime and soda was £1.

According to a sign seen in September 2015, there's an open mic night every Thursday.

Child-friendliness: They have at least two highchairs. There's a pull-down nappy change table in the ladies' (gents' not checked).

Accessibility: A step to get in, though one of the customers on our visit was using a power wheelchair, and left through the side door (which appears not to be kept open by default) so there seems to be level access that way. However, there are several steps up to get to the toilets, with a sturdy handrail on one side.