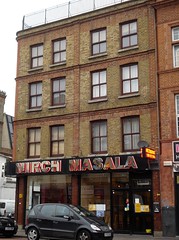 Previously one of the many curry places on Commercial Road in Whitechapel (and part of a small chain), as of March 2014 this is closed following a fire. According to Chowhound, it's been closed since at least October 2013, so it appears unlikely to open again any time soon.

One of the many curry places on Commercial Road in Whitechapel.

Same standard of food as all the other Mirch Masala branches, although Dean suggested the onion bhajia was slightly soggier than he was used to. Wasn't very busy early on a Tuesday evening.