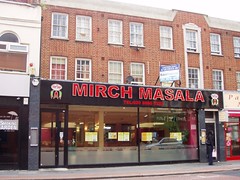 Mirch Masala was an Indian restaurant in Croydon, part of a small chain. It closed down some time between April 2015 and February 2016.

Indian restaurant in Croydon, part of a small chain. It also does takeaway and delivery, with online ordering via Feast Express, via Hungry House, and via Just Eat. According to their frontage as of July 2012, they are halal.

Kake and bob tried the delivery option in January 2015. The food arrived within the promised time, and all correct in terms of what we asked for.

Grilled lamb chops (£6) were cut quite thin, and lacked any crispy fat, but this is a comment on style rather than a criticism, and they worked well this way. The spicing was good, and the meat was neither overcooked nor undercooked.

Karahi fish (£7) was also good; the fish was cooked just right, and the sauce was flavourful.

Bhindi masala (£5.50) was nicely savoury, with plenty of well-caramelised finely-sliced onions, and not too greasy; it was a dry dish rather than one with sauce, but this worked well.

Unfortunately both the breads we ordered — methi paratha (£2) and onion kulcha (£1.50) — were dry and hard, as if they'd been cooked a long time in advance of delivery. Plain rice (£2) was fine though.

Kake's verdict: I'd order from here again, though I'd avoid the bread — this is the second branch of Mirch Masala where I've experienced stale bread!