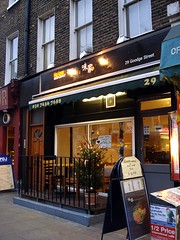 Miga was a Korean restaurant on Goodge Street. It is now closed — as of mid-2010 the site is occupied by a Chinese restaurant called Sanxia Renjia.

The information below is retained for people who want to know what it was like as Miga.

A Korean restaurant on Goodge Street.

On this popular lunchtime thoroughfare, there's always plenty of turnover of restaurants. This restaurant itself replaces one retailing "Kopanese" food (Korean/Japanese fusion), so who knows what will be next. For now, it's a perfectly good option among many others.

Inside, plants and screens break up the fairly rectangular space, which stretches back from the front windows and takes in about 10-15 tables. It wasn't too busy at 12:30pm but gradually filled up throughout a Wednesday lunchtime on Ewan's November 2008 visit.

The lunch set menu includes a free bowl of not particularly spectacular miso soup. Although there are no specifically vegetarian dishes on the menu, they offered to make the noodles without seafood for Ewan. These turned out to be quite tasty, though I couldn't shake off the feeling that they may have involved oyster sauce or something similar. Some kkakdugi (diced carrot kimchi, £2.50) on the side was crunchy and tasty, though rather powerfully pickled.