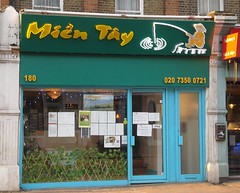 The decor is quite basic, with bright lighting and paper tablecloths. The ground floor seats about 40-45 at close-packed tables, and there's a basement dining area with room for another 35 or so.

Kake and Jo visited on a Monday evening in March 2010. When we walked past at 7pm it was empty, but by the time we returned at 8pm it was packed, partly because they were hosting a birthday dinner for a couple of dozen people, though they managed to squeeze us in and they later opened the downstairs dining space too.

Since Jo is vegetarian, we decided to order entirely vegetarian dishes, and asked the waiter to warn us if we asked for something non-veg (he pointed out immediately that the prawn crackers on the table weren't vegetarian).

We started with tofu fresh rolls (£3.20) photo; Jo was quite keen on these, while Kake felt they were a little bland (more herbs would have been nice) and the wrappers were a little tough. Green papaya salad with tofu (£5.50) photo was rather better, with a good balance of zingy flavours, and a sensible treatment of the tofu; they'd cooked it as a block and then sliced it thinly, giving a nice contrast between the soft interior and the crisp exterior. (Our waiter appeared not to have communicated our vegetarianism to the kitchen, since more prawn crackers appeared on top — though it's possible that he decided we wouldn't care, having seen Kake eating them earlier.)

Stir-fried tofu with lemongrass and chilli (£4.70) photo similarly showed a good understanding of how to make tofu tasty; this time, the tofu slices were slathered in a richly-flavoured sauce, the flavours of which actually penetrated the tofu instead of just sitting on the surface. Stir-fried aubergine with garlic (£4.50) photo was also pleasing, with a soft texture to the aubergine pieces, a good flavour, and no excessive oiliness. Plain rice (£1.50/portion) came in generous portions, and was fine.

We'd asked for a wine list, but were only offered a choice of house red or house white; we went for the white (£12/bottle) and it was fine. They used to do BYO, not sure if they still do.

Service was fine, and our food arrived surprisingly quickly given the circumstances of the large group dining alongside us. No service charge was added to the bill.

Kake's verdict: I was very pleased that the food was so flavoursome despite our vegetarianism, and I really liked how they handled the tofu. I'll be coming back to try the meat dishes (the quail and frogs' legs have got good reviews), though I'd happily eat vegetarian here again.

Accessibility: A small step up to get in, two more steps to get to the ground floor dining area, and the toilets are down a flight of stairs with no bend and a handrail all the way.