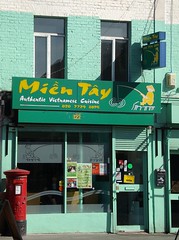 Vietnamese restaurant on Kingsland Road, also offering takeaway but not delivery. They have another branch in Battersea.

Kake and Liz visited on a Thursday lunchtime in March 2010. There were a couple of other customers when we arrived around 1pm, but plenty of spare tables.

We decided to go for the lunch menu, which offers a number of rice and noodle dishes priced at £5 or less including a complimentary bowl of vegetable soup. Our waiter asked us if we wanted the soup or not, a nice touch to cut down on waste. We said yes to the soup photo, but it turned out to be rather dull and unexciting, and we both left most of it; it wasn't awful, just kind of boring.

Mains were better. Kake's rice vermicelli with chilli and lemongrass tofu (£5) photo was ample and tasty, as was Liz's stir-fried rice noodles with seafood (£5) photo. An accompanying glass of home-made lemonade (£2.50) mostly consisted of crushed ice, and although quite tasty, seemed a little overpriced for the amount of actual drink.

We were seated at a table at the very front of the restaurant, next to the door, which seemed to have a rather overenthusiastic closing mechanism. There was quite a lot of staff traffic in and out of the place, which meant that our meal was punctuated by frequent loud bangs as the door slammed shut after people. We found this amusing rather than annoying, but it could get a bit irritating over a longer meal (we did wonder if the packing tape wrapped around the edge of the door might be a failed attempt to soften the noise).

Kake's verdict: I'd probably come back if I was in the area (partly because of a good experience at their other branch), though I'd not bother with the free soup again and I'd ask to be seated away from the door next time. The menu on their website lists a seafood hotpot which I'd be up for trying.

James visited with a friend for a Saturday lunch with a friend in April 2011 and loved it. Beef in betel leaf was much meatier and tastier than the Song Que equivalent and the Pho (Rare steak slices and well done brisket) was equally good though their decision to provide coriander instead of saw leaf herb was a little disappointing (personal preference, perhaps). My friend's battered squid starter was apparently delicious, though I didn't try any as I don't eat seafood. Non-lunch-menu lunch for 2 with starters was about £28 including jasmine tea for two and a soft drink. The atmosphere inside was quite lovely and I particularly appreciated wooden chopsticks rather than the plastic ones you get everywhere else. I can see myself going back in the future.

Accessibility: A small step up to get in. Toilets are up a rather narrow staircase with a bend in the middle and a handrail that only goes halfway up.