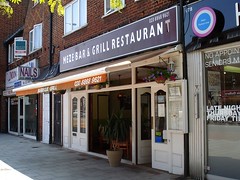 Meze and kebab restaurant in Eastcote. They also do takeaway.

It seats around 50-60 in a single room with large patio doors at the front that are left open in good weather. The decor is light and bright and relatively uncluttered photo.

Kake visited on a Tuesday lunchtime in July 2013. When I arrived around 12:30pm there were no other customers, and this remained the case throughout my visit. No music was playing when I turned up and indeed no staff were in evidence, but after a short while a member of staff appeared from the kitchen and a little later music was turned on quietly.

A selection of crudites and a basket of warmed pitta bread photo were placed on the table as I sat down, and a fresh basket of bread arrived with my food — no charge for any of this appeared on the bill.

Mixed meze (£6) photo included eight different items, nicely presented and in pretty generous portions for the price. The vegetables in the salads were fresh, crisp, and crunchy; the tarama was light and fluffy; and the broad beans were well cooked. A starter portion of imam bayildi (£4.10) photo was fine.

Service was fine. Tap water was brought on request in a jug with ice. No service charge was added to the bill.

Kake's verdict: Overall, the food was fine without being outstanding. I wouldn't make a special effort to come back, but if I was in the area anyway and others wanted to come here then I wouldn't object.

Accessibility: No steps to get in, and no steps to the toilets either. The ladies' is a single relatively large cubicle.