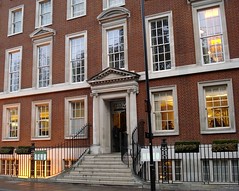 Maze was a Gordon Ramsay restaurant in Mayfair. It closed for good on 2 February 2019.

Restaurant in the Gordon Ramsay stable, in Mayfair. It gained a Michelin star in 2006, but lost it again in 2016.

her welshness and two others visited in September 2008. (Note that this was under the previous head chef, Jason Atherton, who left at the end of April 2010.)

We opted for the four-course menu (priced at a reasonable £28) — although there is an a la carte menu with an obviously greater selection. To start, we had swede honey soup with cep and braised rabbit. This came with a hot little brioche-type roll which had a root vegetable accompaniment. Very good.

Third course was a side of Casterbridge beef with beetroot and pureed vegetables. The beef was heavenly. The pureed veg was OK, although I thought it had the texture of that well-known powder-potato product.

her welshness' verdict: Overall the food was very good. The service was military and precise. I would recommend that you go for the a la carte menu as opposed to the set courses — although it was very good to experience all those different flavours, it felt like it was all over in an instant and I did not exactly feel satisfied at the end.