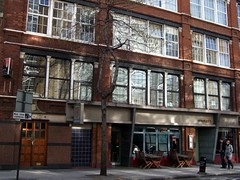 Despite its long run on this site of over 10 years, this has now closed. It was replaced by a bar/diner called Giant Robot, opened and operated by the same people, but this has also closed in its turn.

A long-standing cocktail bar in Clerkenwell, which has been around for over ten years now. It has a sister bar just off Oxford Street, as well as other outposts in Shoreditch, Ibiza and Melbourne.

The first bar in this cocktail chain remains a decent place for a drink late into the night. On Ewan's visit, after pub closing times, the place wasn't particularly busy, but the staff were tolerant and gracious and perfectly happy to mix drinks off the fairly short but well-chosen cocktail menu.

Aside from cocktails, the bar also offers a good range of wines as well as a few bottled beers (including Meantime beers).

The bar itself is laid out over several levels, with little alcoves and mezzanines. The bar itself is down some stairs from the front entrance, towards the back of the space. Decor is muted and dark, and the lighting kept low as you'd expect.