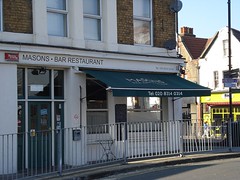 Masons was an excellent value local restaurant in Ladywell. It closed for good in August 2011.

This place is furnished in a basic country cafe style, with solid wooden tables, and light coloured walls. Service is always friendly, but on visits by Ewan in both 2008 and 2010 they have been understaffed, so it can take a little while to get attention to make orders (on the other hand, on the 2010 visit, the food came out very quickly). On both a Thursday and a Friday evening it has proved to be very popular, so booking may be advisable (unless you are eating very early or late, or on an off-peak day). The downside is that this means it can get a bit noisy.

The food sticks to continental-style dishes but changes quite regularly, at least every week or two photo of sample menu, Feb 2008. The food used to be offered as a set menu (either two or three courses), but as of Ewan's November 2010 visit, the menu appears to have reverted to separate prices for each dish (still reasonable value, though: starters and desserts are around £5, mains at £8-£12.)

Food is well-prepared and presented and served promptly. Comments on the internet suggests that the quality can be variable, and this has been Ewan's experience as well -- never really bad, but some dishes work better than others.

On one visit in June 2008, Ewan's wild mushroom main course, in a filo parcel, with dauphinoise potatoes and cheese, was extremely tasty, though my companion's tuna (the menu advertised monkfish but they were out of that) was not quite so highly praised. Desserts were perfect, both the cheesecake and the summer pudding. Returning later in the month, the vegetarian option was a Thai green curry, fine but somewhat bland, though banoffee pie dessert was excellent. On a November 2010 visit, Kerry's rump steak with chunky fries (£10) was cooked rare, just as requested, while Ewan's goat curry certainly didn't skimp on the meat, and was both filling and tasty.

They have a decent wine list, the shiraz cabernet (£12.50) was perfectly good, and a muscadet (£14) was likewise lovely, served in an ice bucket. They also have Erdinger beer on draught, as well as a fairly large selection of Belgian beers. There's a few seats along the bar, and some seating outside just off the main road, and clearly some people just stop by for a drink.

Ewan's verdict: Just the way local restaurants should be, well-presented and tasty food in a comfortable setting. Will definitely return as long as the food and the value remains good.