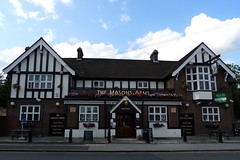 The Mason's Arms was a pub in Upminster. According to Pubs Galore, it closed at the start of 2011, and was quickly demolished and replaced by houses.

Unlike many of the other pubs in the area, it doesn't seem to be part of a chain. The decor is quite traditional, with lots of burgundy and dark wood, and upholstered banquette seating. There's a paved beer garden out the back, with picnic benches as well as dark green moulded plastic patio furniture.

Kake and Ewan visited on a Thursday evening in July 2009. Real ales available were London Pride (£2.60/pint), Courage Best, and Old Speckled Hen. Service (from the landlady?) was friendly. Music was playing, not overly loud, and not too annoying (though Kake still has Outkast's Roses as an earworm, two days later). There were plenty of people in at 6pm, but still a few seats available.

A sign seen outside in July 2009 said that quiz night is Monday from 9pm.

According to a board seen outside in July 2009, food is served noon to 9pm daily. It's fairly standard pub food photo of menu. There's a separate restaurant, accessed via the beer garden, but the menus in there looked identical to the ones in the pub part.

Accessibility: A fairly high step to get in, another step or two to the beer garden. The rest of it is on one level, but the ladies' toilet is minuscule.