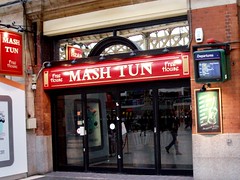 This very small pub space has closed as of October 2011, to become a sushi takeaway. The same company still operates The Iron Duke in the station concourse.

A tiny station pub in Victoria Station, run by the same company as the nearby Iron Duke.

This tiny space along the side of the main concourse of Victoria, near the ticket desks, is focused squarely on the transitory passing trade. The inside has room only for the small bar and a couple of high stools (surface area for drinks supplied by large wooden casks), as well as a few shelves along either wall. There are four more tables outside on the concourse, and most drinkers are solitary, waiting for their trains to come up on the departure boards.

It serves its purpose, though. There are three handpulls for ale, with London Pride (£3.15/pint), Old Speckled Hen and Bombardier on an August 2009 visit (the last of these was off at the time). They also have basic draught lagers, viz. Grolsch, Stella, Worthington's White Shield and Carling, as well as Guinness, and Strongbow cider. There's a small range of bottled beers, with a few interesting world choices marked up on a blackboard.