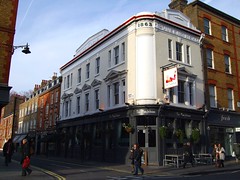 A modern pub/bar on Marylebone High Street. The building has long been a pub, and its original name (The Queen's Head) is still clearly etched into the building, though it was most recently a Tup pub.

This is a single-room venue, with the bar along one wall, and some sofas and tables along the windows at the front and side, and a bit more space down the back. Most tables were taken on Ewan's visit on a Tuesday after work, though there were stools along the bar. The place has a pleasant enough atmosphere, dominated by besuited office workers based around this upmarket shopping street, and on the Tuesday night we were there, an acoustic musician started playing around 6:30pm, but not so loudly as to prevent conversations.

The Marylebone seems to prefer to focus on cocktails and wines, though there are two handpulls for ale tucked away at the end of the bar (with Deuchars IPA and Caledonian Over the Bar on our visit), and a range of decent draught lagers (Sagres, Birra Moretti, Amstel and others). Their happy hour cocktails offer extends to 9pm and includes two for £8. The cocktails list is a good length (and there's a special section for Sunday 'tea' cocktails), and most we tried were perfectly decent.

It doesn't serve food itself, but offers a menu sourced from the local Strada, from which food can be ordered.