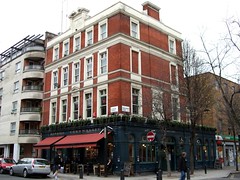 A Mitchells & Butlers Castle pub in Bloomsbury, alongside the Brunswick Centre. The pub is sometimes erroneously referred to as "The Marquis of Cornwallis".

This a pleasant and spacious pub, though its location means it's often rather busy with visitors to London, and local office workers on the weekday evenings. The downstairs area is open and airy, with large tables around the side of the room, a few couches, and some booths in the back, behind the bar. The back end of the bar is the service area, and gets very noisy at busy periods, with a constant crash of dishes, so it's best not to sit too near to there. Further seating is available on the street, under covers.

There's another upstairs room (they rather grandly call it the "drawing room") which has its own bar and all the same beer as downstairs, including three ale handpulls. It wasn't open on the Sunday Ewan visited, so is perhaps only used on the busiest evenings.

The downstairs bar has four handpulls, with Tribute, Pride, Weston's organic cider and one off on a July 2009 visit. Other draught beers include Leffe, Staropramen, Sierra Nevada, Peroni, Budvar, Amstel, Schneider Weisse, and Franziskaner. Like all the Metro Professionals pubs, it has a reliably good range of beers. There's a short-ish winelist, with small 175ml glasses at around £3.75, perfectly decent wine.

Ewan first visited on a Sunday in July 2009. Despite being popular, there were still a few tables available. The staff were uncommonly chatty and friendly (and though my server tried to convince me he could be very rude to customers, I wasn't entirely convinced).

Of the Sunday roast options, I had the nut roast, which was a little pricy at £9 photo, but was pretty big, so not bad value at all. The nut roast came with a yorkshire pudding, roast potatoes as well as a mash with spring onions, steamed vegetables (broccoli, carrots, beans), and a gravy boat with a nice chunky oniony gravy. Jo's smaller hummous with flatbread (£3.50) came with carrots and cucumber for dipping (and the hummous rather oddly in a gravy boat as well), though the plate was warmed, meaning the cucumber was warm too.

Ewan's second visit, on a lunchtime in March 2010, confirmed that the menu included plenty of options, including decent sandwiches at £4 (served as standard with crisps, but with chips or salad available for an extra £1.50).

Accessibility: Step-free access to the pub itself, and there's an accessible toilet on the ground floor around the back of the bar. Other toilets are upstairs. See also Twitter thread on accessibility.