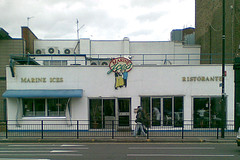 Marine Ices was an Italian restaurant very near Chalk Farm Station. The Mansi family, who originally set up the business, retired around 2013. Following this, the restaurant was briefly run by the Ponti chain, but it finally closed in mid-2014.

As of 2015, there is still a business in the area called Marine Ices, at 61 Chalk Farm Road, but this is run by different people, and it's only a gelateria, not a restaurant.

The Mansi brothers have been serving ice cream since 1931, and have had a restaurant here since 1947. They have quite a traditional Italian restaurant, decorated in 1950s style with lots of B&W photos. The real attraction is the fabulous Italian gelati, though. The sorbets are delicious, particularly blackcurrant, and the pistachio and marsala ice-creams are very good. [Joel]? has never had better Italian-style ices outside Italy.

According to their website, Marine Ices supply ice cream and sorbets to hundreds of restaurants, bars, theatres, and hotels in and around London. The only one we know of for definite is Cucina, SE1 2EL; please feel free to add to this list if you know of any other outlets...

Comment added by Simon: While the ice cream is the thing here, the pizzas aren't bad either. A nice change for kids from the pizza chains.