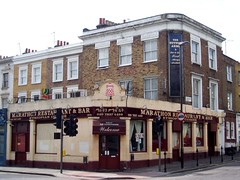 One of three Ethiopian restaurants on Caledonian Road, north of King's Cross.

secretlondon went here one Monday night in November 2009 with a group from College. Ethiopian food seems to be very similar to Eritrean food on the basis of this visit.

We had tea to start (tea bag with spiced hot water) and then two large injeeras were brought out. We were then brought a selection of dishes which we added to the injeera ourselves. The vegetarians in our party were given their own, smaller, injeera. The food was nice. There was a delay in getting us more injeeras but no other problems. More food than we could eat and the tea came to £11/head including service charge.

Kake and friends visited on a Wednesday evening in October 2014. We went for the mixed selection (about £28) which included meat and vegetable dishes. Our waitress told us that would be enough for three people. Since there were five of us, we also had an order of tsome beye-aynetu (assorted vegetable and lentil dishes; £7). Along with a drink each (some soft drinks, one glass of wine) we paid just over £11/head including service for slightly more food than we could eat.

Accessibility: A step to get in, and two more steps to the dining area. Once you're in, there are no further steps to the toilets. The ladies' toilet at least is very narrow.