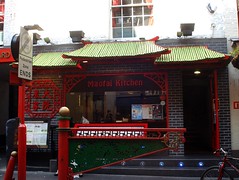 Maotai Kitchen was a Chinese restaurant in Chinatown, specialising in food from Guizhou province. It closed in 2016; according to a poster on Hungry Onion this was due to a 50% increase in rent.

Chinese restaurant in Chinatown, specialising in food from Guizhou province. Its Chinese name is 農家大院. It also does Chinese hotpot.

The premises have been occupied by a steady stream of short-lived restaurants over the past few years. Maotai Kitchen is the fifth or sixth to open up at the same address in just three years, though it seems to be rather more persistent than its predecessors.

Kake and bob first visited on a Tuesday evening in July 2013. There were a fair few people in when we arrived around 6:30pm, but the staff had no problem finding us a table on the first floor. Music was playing quietly.

Marinated cucumber with tomato and chopped garlic (農家拍黃瓜; £4) photo was very savoury and fresh, with a zing of spice and fresh herbs. Hot and sour fern root noodles with shredded chicken (雞蕨根粉; £5) photo was fine; although it was our least exciting dish, this is only because the competition was so strong. (It also possibly wasn't made with actual fern root noodles, judging by the colour.)

Stir-fried vermicelli with cabbage (包菜炒粉絲; £6) photo had a nice combination of textures from the crisp cabbage, soft egg, and chewy glass noodles. Villagers' spicy bowl (山村毛血旺; £16) photo was a combination of meatballs, cubes of pig's blood, spam, king prawns, squid, pork intestines, beef tripe, Chinese leaf, and black fungus. The spam was very tasty, the black fungus was nicely softened but not overcooked, and the squid and king prawns had the perfect texture; the tripe, however, was extremely chewy and seemed to have been undercooked. The meatballs had great flavour and texture.

On an April 2016 visit by Kake, Sarah, and nine others, almost everything we ordered was good, and much of it was very good. Marinated cucumber with tomato and chopped garlic (£4.50) was again one of the stand-out dishes. We also enjoyed the spicy duck tongues (£6.50), with good texture and just the right amount of spiciness in the sauce. Grilled sea bass with chillies, lotus roots, and potatoes (£23.80) made an impressive centerpiece, and also had very good flavour and texture in both flesh and skin. Chicken with taro and preserved vegetables (£14.50) was excellent, with a beautiful texture to both taro and chicken.

The only real disappointment for Kake was the sweet sticky rice with red dates and lotus roots (£6), which had a dull, stodgy texture, though others did enjoy the sweet simmered nuts that came with it. Overall, the vegetarians in our party were very well-served, with plenty of choices on the menu, all clearly marked.

Kake's verdict: Liked it a lot both times, still want to come back and try more of the menu. I'd definitely order the cucumber and the chicken with taro again.

Accessibility: A couple of steps to get in, and much of the seating is up additional flights of stairs.