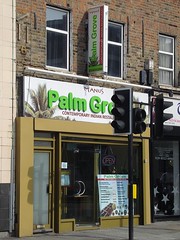 Manus Palm Grove was a South Indian restaurant in Stratford. It has now closed. According to Google Street View, by July 2015 it had been replaced by an "early education centre" called Newtec.

South Indian restaurant in Stratford. They also do takeaway and delivery. According to a sign in the window, the food is halal (though they are licensed to serve alcohol).

The decor is quite nice, with wood carvings here and there, gold-painted moulded pillars, and paintings of rural riverside scenes on the walls. The room is long and thin, and there's only a chance of natural light at the front, with the rest of the space lit by a combination of recessed spotlights and more ornate chandelier-like lighting. Chairs are comfortably wide half-round basketweave with upholstered panels at the back, and the colours blend in nicely with the subtly-patterned tabletops. There are around 50-60 covers in all.

Kake visited on a Friday lunchtime in March 2012. Arriving around 12:30pm, I was the only customer aside from a family party of four. Music was playing, though not too loudly.

The beep of a microwave signalled the impending arrival of my vegetarian thali (£5, lunchtimes only) photo, which included three curries, two pickles, rasam, half a poppadom, and a very generous portion of rice. Unfortunately, the poppadom was very stale and chewy. The curries were potato-heavy, and many of the pieces of potato were unpleasantly close to being undercooked. Conversely, the aubergine that appeared in one of the curries was on the verge of disintegration. Perhaps the best of the dishes was a mixture of carrot and potato batons in a creamy coconut sauce, though the undercooked potato marred even this.

Kake's verdict: Although I had high hopes after seeing some interesting-sounding dishes on the main menu, my thali was very disappointing. On the strength of this, I'd be unlikely to come back unless I was in the area already and out of other options.

Accessibility: A fairly small step to get in. It's on one level once you're in, though getting to the ladies' loo requires a 90 degree turn in a small space, and the cubicle is quite small too.