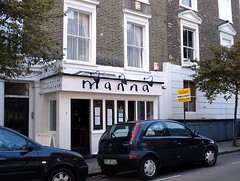 Kake, Kat, doop, Juliet, Marna, Sean, Pete, etc visited on a Friday evening in September 2008. As a group of ten, we'd booked a table, but the place seemed to still have a few empty tables (we'd booked for 8:45pm and didn't arrive too late after that). Service seemed a bit slow, with us not getting our starters until around 9:45pm according to the timestamp on Kake's camera.

Kake started with something off the specials menu; hijiki salad with sushi maki rolls photo. This was pretty good, with well-seasoned rice, well-chosen fillings, and a very nice presentation.

My main was less good; I went for the Thai platter (£13), which included tom kha gai soup, crispy noodles, mock duck, spring roll, rice, and green papaya salad photo. The soup was just fine, but the noodles were chewy rather than crispy (and even completely uncooked in parts), the spring roll was average, and the rice was boring. Rather than being something akin to the excellent Thai salad som tam, the green papaya was just endless sheets of, well, green papaya, and eating it was a rather joyless slog. Everyone else seemed very pleased with their food, though, and I've always been happy with the food here before, so I suspect I just got the one duff dish which hopefully won't stay on the menu too long.

Kat, for example, had the Chef's Salad - a huge mountain of greenery surrounded by generous helpings of feta, sundried tomatoes, potato salad, beans and various seeds - which was very enjoyable indeed. It was filling without being stodgy and the ingredients were all excellent.

A number of us also shared a few bottles of an intriguing apple wine that tasted rather like very strong, flat cider (this was deemed perfectly agreeable to those drinking it).

doop's verdict: The food is quite awesomely tasty, and the vegan desserts are outstanding, particularly the chocolate semifreddo. The staff are very friendly, which somewhat makes up for the restaurant's occasional tendency not to have any port left.