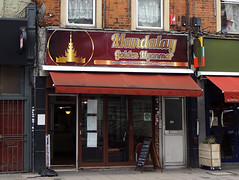 Burmese restaurant at the Brondesbury end of Kilburn. It was previously at 444 Edgware Road photo, but moved to Kilburn High Road in 2017.

It's a small space, made to seem even smaller by the patio doors that cut across the middle of the room (left over from a previous tenant). In the front section, seating for just 14 people is provided by a mix of upright wooden chairs and armchairs, but there's a separate room further in, down a couple of steps, that seats another 25. Decor is simple but effective, with Burmese art hanging on plain-painted walls.

Kake visited on a Tuesday lunchtime in September 2018. I was the only customer when I arrived around 12:15pm, and this remained the case throughout my visit. No music was playing.

Tea leaf salad (£4.90) photo consisted of pickled tea leaves tossed with shredded lettuce and crispy fried onions, garlic, peanuts, broad beans and lentils. This is a classic Burmese dish, and was rendered in a fairly unadorned way. The textural contrast was good, but it did get a little samey partway through; perhaps it would work better shared with another diner.

Mohinga (fish and noodle soup; £8.90) photo was a little gloopier than I would have liked. I initially worried it would be bland, but there was enough chilli heat to keep my interest, and the fried onions sprinkled over it worked alongside the onion fritter perched on top to give extra flavour and texture. The rice noodles were cooked very soft, which I liked. The fish presence was very subtle.

Service was friendly, and we had a good chat about Burmese food. Tap water arrived swiftly on request, in a large chilled jug. No service charge was added to the bill.

Accessibility: A step to get in. Two further steps to the toilets.