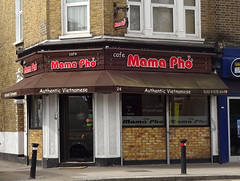 Small Vietnamese cafe/restaurant in Deptford. It opened in Spring 2009 on the old site of Cafe East (which has now moved to Surrey Quays), and is run by the same family. Note that it's closed all day on Tuesdays and doesn't serve alcohol. It's also cash-only, but signs on the counter offer directions to the nearest cash machines.

It's firmly cafe-style in ambience, seating just 32 people on black hoop-backed chairs at melamine-topped tables. Forks, spoons, and chopsticks sit in wire baskets on each table, along with large bottles of sriracha. Exposed brickwork on the front interior wall adds interest, along with a few pictures and posters on the other walls.

Kake first visited on a Friday lunchtime in April 2009. When I got there around 1:30pm there were a couple of other customers, but it never got really busy. Capital Radio was playing, but not too loud.

I had the bun bo hue (spicy beef noodle soup, £6) photo. This had just the right level of chilli heat for my palate, though no doubt bob would have wanted to add some of the extra chillies that came on the side along with lemon wedges, beansprouts, and herbs. The beef was fairly lean but not dry, and in a quantity generous enough that at one point I was playing "hunt the noodle". The broth was well-flavoured. I'd order this again.

I also got a portion of goi cuon (fresh summer rolls, £4.50) to take away and share with bob later on; these were just fine, with plenty of herbs and the right proportion of prawns and pork.

Kake visited again on a Thursday lunchtime in April 2016. Arriving just after their opening time of 11:30am, I was the only customer for most of my visit. Music was playing on the radio, loud enough to be noticeable but not loud enough that I'd have struggled to follow a conversation.

This time I had the bun cha gio thit nuong (rice noodles with grilled pork, spring roll, salad, and fish sauce; £7) photo. The grilled pork was a generous portion and very good; nicely tender, well flavoured in itself, and well seasoned. The spring roll was good too, packed with plenty of finely-julienned vegetables. The salad was a little lacking; there was lots of cucumber, but I'd have liked more carrot and lettuce, and the herbs had clearly been sliced a while ago as they'd blackened on the edges. The noodles themselves were fine.

Service was friendly. Tap water arrived swiftly on request, in a plastic glass.

Kake's verdict: I'd happily come back if I was in the area, despite the salad disappointment on my latest visit.

Accessibility: One step up to get in, and the toilet is down two steps.