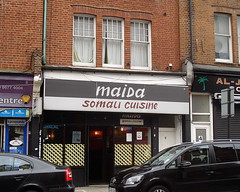 It's divided into two sections, with a bar-like area at the front and a smaller, cosier area up a couple of steps at the back. Decor is cafe-style, with orange plastic jugs of water on the tables along with rolls of blue kitchen paper to serve as napkins. Paper flowers hang on the walls, and colourful scarves hang from the Artexed ceiling.

There's no menu; the staff will tell you what's available. Options include fish, a chopped chicken dish, pasta, meat with rice, and a vegetarian dish involving spinach.

Kake visited on a Wednesday lunchtime in March 2014. There were quite a few people already in when I arrived a little after 1pm. The front part was mostly full, with several men including a large and animated group eating lunch, but I was led to the back area which was a little quieter. No music was playing, but there was plenty of lively conversation going on.

I went for the "meat and rice" option, which included soup, salad, and banana all for just £6, as well as free refills of rice if required. This seems to be available in larger portions too, as the three women at the table next to me ordered the same and were given a communal platter to share.

A bowl of vegetable soup photo was brought first. This was light but savoury, enlivened by the lemon slice and fresh green chilli paste provided on the side.

The meat itself consisted of a large mound of bone-in lamb and potato, stewed in a light brown sauce photo. The potatoes had been browned before stewing, giving them that extra edge of texture and flavour. The lamb was tender and flavourful.

There was a lot of food overall, but they had no problem packing up my leftovers for takeaway.

Service was friendly and welcoming, as were the other customers — one woman at the table next to me said hello and we had a little chat while she waited for her friends to arrive. Even though I'm a novice at Somali food, I didn't feel unwelcome at all.

Kake's verdict: I'd like to come back and try some of the other dishes. My meal was certainly very good value.

Accessibility: Didn't notice about steps to get in, but in any case there are two steps up to the back room, from which the toilets are accessed.