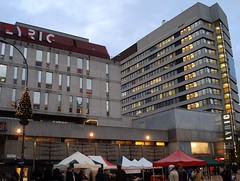 This is one of the best theatres that Sam has been to in London - it was a Matcham original, but after hard times was scheduled for demolition in 1966. A massive public campaign led to its reconstruction in a modern style, with a lot of conveniences for theatregoers, performers, technicians, and venue staff that the original didn't have, but preserving the gorgeous Victorian interior.

A lot of the original plasterwork had to be replaced, but was re-cast from the original moulds, which had been preserved by the local company who'd done the plasterwork for Matcham originally.

In general, it's well worth going to see a performance here - they have extremely good taste & artistic sense.