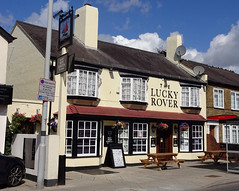 According to the Oct/Nov 2016 London Drinker, the Lucky Rover closed following a flood in 2016, but according to WhatPub it's open again as of April 2017.

Lunchtime food except at weekends, according to the 2008 Good Beer Guide.