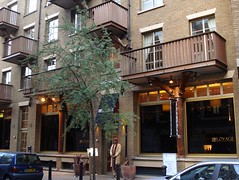 Lovage was an Indian restaurant in Bermondsey, near Shad Thames. According to the LondonSE1 forums (scroll down), it has now closed.

Indian restaurant in Bermondsey, near Shad Thames. It's quite swanky inside, with modern decor photo and a backlit bar area photo on the ground floor.

Kake and bob visited on a Saturday evening in May 2009. We hadn't booked, but there was no problem finding us a table. Complimentary poppadoms and chutneys were brought shortly after we sat down; bob was very pleased with the poppadoms, though Kake thought the chutneys photo were a bit generic.

Kake started with tandoori malai chops (£7) photo; these were OK, though they were quite small and dry. I didn't think they were worth the price. bob opted for the vegetable samosas (£4) photo, which were much better, with a well-flavoured filling (including decently-cooked peas) and proper samosa pastry rather than the cop-out filo that a lot of places use.

Moving on to mains, Kake went for one of the plated main courses; scallops in a coconut and cashew nut gravy (£14 including rice) photo. This was pretty good, though very rich; the scallops were competently cooked and the sauce was well-flavoured, with an evident scallop flavour throughout. bob was quite pleased with his lamb rogon josh (£9) photo and keema naan (£2) photo too.

We also shared a side dish of bhindi massala (£3.25) photo; this, like the chutneys at the start of the meal, was a little generic and bland, as we'd suspected would be the case from the fairly uninspiring nature of the vegetable side dish section of the menu.

We attempted to order gulab jamun from the dessert menu, but they'd run out. We instead contented ourself with mango kulfi for bob, and a cup of decent enough masala tea for Kake.

Kake's verdict: I'd come back, since we're local, but I don't think I'd travel across London for it. I'm also not sure I'd bring a vegetarian here. I would happily eat many of their samosas though.

Accessibility: There's a small ramp down to get in, and the bar area and toilets are on the level, but all the dining seating is up at least a few stairs, with the majority of it being up a full flight of stairs.