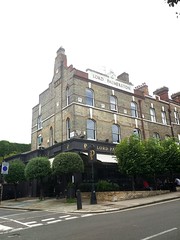 Note: The Lord Palmerston closed for refurbishment in 2017, and reopened as part of Young's managed portfolio (it had previously been run by tenants). We haven't visited since, and so some or all of the below may be out of date.

Inside there are several spaces around the central bar, with a dining room laid for service in a conservatory area to the rear, tables and couches around the sides of the front room, and an upstairs bookable function room. There's a real open fire, though on our February 2016 visit it was dead (they apologised: hadn't had a delivery). A sheltered walled beer garden is accessed through the conservatory, and there's a heated courtyard at the front for smokers.

Board games available include chess, Trivial Pursuit and Risk. Also, some newspapers, and, unusually, Private Eye (definitely theirs, because it has "Lord Palmerston" scribbled on the front).

When Ewan and Kerry visited in June 2012, music was playing, not too loudly, and there was a small TV above the bar to the right of the entrance showing football (but with the sound turned off). When Rowley Birkin QC visited in February 2016, the music was easy listening.

There are five handpulls for ales at the bar, which on our June 2012 visit were dispensing Sharp's Doom Bar and Cask Pilsner (a seasonal), Purity Pure Gold (£3.60/pint), and Sambrook's Junction, though over the course of the evening the first two ran out and were not replaced. The ales we tried were well-kept. On our February 2016 visit there were four ales — Young's London Gold, Butcombe Gold (£4/pint, and in good condition), Sharp's Doom Bar, and Twickenham Naked Ladies — and a "mystery cider". They also have also prominent draught keg taps for Staropramen, Bitburger, Red Stripe and Beck's Vier, as well as other cooking lagers and Guinness hidden away lower down. In February 2016, two of the keg beers were from Camden Town Brewery.

In June 2012, Ewan and Kerry split a burger (£10.50) photo, which was a substantial size and came with a couple of (really quite nice) onion rings, and a bowl of chunky potato chips, as well as dips and condiments. The burger was cooked medium and was of good quality.

The pub has its own wifi; get the password from the bar.

Ewan's verdict: Attracting the well-to-do denizens of the area, the Lord Palmerston is a pleasant pub in a leafy area. The ale selection may not be extensive, but it's well-kept.

Rowley Birkin QC's verdict: I would class this place as a gastropub. The leafy beer garden looks like it would be very pleasant on summer evenings.

Child-friendliness: There were children present on our June 2012 visit (an early Sunday evening), so one presumes it welcomes children.

Accessibility: There is a very shallow bump to get in (not quite a step), but toilets are up some stairs, and there are four or five steps to get into the garden from the conservatory.