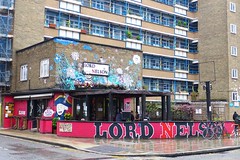 Although it looks just like an estate pub from the outside, the inside is decorated in retro trendy style, with dark red walls, collage art, a standard lamp in the corner, and pillar candles on the tables. The front part has a combination of normal tables, long communal tables, and tiny tables with low stools, while the back part has tables set for dining.

Various RGLers (bob in June 2007, Bec and Ewan in August 2007) have noted the friendliness of the bar staff. We've also noted that it gets busy on a Friday night, so you'll need to be in early to secure an outdoor table.

They usually have real ale on (London Pride ~£2.60/pint as of June 2007; we also noted Black Sheep Bitter in August 2007), though on our most recent visit (December 2009) we weren't able to sample any as they were doing some kind of maintenance on the beer engines. Strongbow was £1.75/half in December 2009. House wine as of August 2007 was a very quaffable Concho y Toro merlot (£3/small glass).

When Kake and Richard visited on a Tuesday lunchtime in December 2009, shortly before Christmas, many of the tables had been booked; we managed to find seats at 12:30pm but half an hour later people were struggling. Christmas music was playing, a little too loud for comfortable conversation even before the place filled up.

They do food, and the menu does change (we're not sure how frequently). In December 2009, Kake's ribeye steak was cooked blue as requested, but wasn't particularly competently trimmed, being surrounded by a frustrating amount of connective tissue. Chips were skin-on, not presalted, and just fine. (We resisted the Christmas special of "turkey stew with stuffing dumplings".)

We've also previously tried the vegetarian pie (Ewan in August 2007: "excellent"), the Sunday nut roast (Kake in December 2007: "quite tasty"), veggie sausage baguette (£6.50 as of February 2008, including salad and a big portion of chunky chips) photo, veggie lasagne (£7.50 as of February 2008, a massive portion and some lovely looking bread, though contains mushrooms so not for the mushroom-afeared).

As of May 2008 they were doing barbecues on Friday evenings.

As of September 2007, poker night is Monday with a £10 buy-in. There may be free wireless. There are two bike stands right outside the pub, very handy!

Accessibility: A ramp to get in, and toilets are on the same level (though confusingly signed, particularly if you have less-than-perfect eyesight).