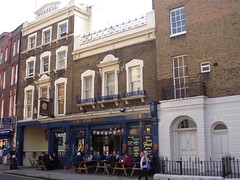 A pub in Bloomsbury, just behind the Brunswick Centre, near Russell Square Station.

It's a single-room pub, though there are tables outside on the street, and in the passageway alongside the pub. It's a perfectly friendly place and a good bet for a drink in the area, especially if you like ale, though at busy periods (after work weekdays) it get full easily due to its small size.

There are six ale handpumps, which on a September 2008 visit had Deuchars IPA, Bombardier, Courage Directors, John Smith Cask and Wadworth 6X (£3.05/pint on that visit), the last rather indifferently kept, though it was fine on a subsequent visit, as was the Deuchars. Ales were very similar on a February 2013 visit, with two guest ales. In May 2010, a half of Symonds cider was £2. Along their very crowded bar top photo, they also have fonts for the basic lagers, along with a range of Budvar options (the regular offering, Budvar Dark, a nifty 'Half and Half' tap to mix the two together, and Budvar Yeast).

As of September 2008, lunch is served noon-2pm Monday to Friday. In the evening, they only have standard bar snacks as well as a few varieties of Pukka Pies.

There's a small outside area to the side of the pub in a courtyard, with a couple of tables for smokers.

Accessibility: A step up to get in. Not sure about the toilets.