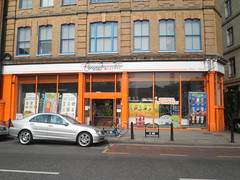 They also have branches in Leyton, Kingston, and Walworth. This branch used to include an Aobaba concession in the form of a banh mi (Vietnamese baguette-based sandwich) and bubble tea takeaway stand, but as of March 2015 this has moved to 57-59 Kingsland Road.

It's a reasonably large store, well-organised and clean. The stock is quite varied, covering ingredients from a number of East/Southeast Asian cuisines such as Chinese, Japanese, Korean, and Vietnamese. As well as food items, they sell homewares such as sake flasks and rice bowls.

They also had a wide variety of soft drinks such as nuoc yen and aloe vera drink, as well as bottled beers/lagers such as Sapporo (Japanese), Tsing Tao (Chinese), and Bintang (Indonesian).

Accessibility: Four steps to get in (with handrail).