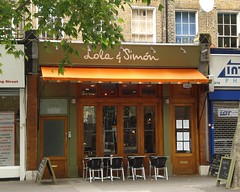 Lola & Simon was an Argentinian/New Zealand restaurant in Hammersmith. It has now closed. As of October 2014 the premises are occupied by another restaurant called L'Amorosa.

There are two seating areas and some seats outside.

bob visited on a Thursday lunchtime in March 2009 and there were a few spare tables. I was brought a glass of tap water without asking. Service was friendly.

I had a steak sandwich with fries and salad (£8.50) photo. It was a good piece of steak, and the focaccia bun was pretty good as well. The fries were nice and crispy. I had a homemade lemonade (£2.50) photo to drink, which was fine, though it could have done with more lemon and sugar.

Accessibility: One area of seating has a very small step up to it. An area at the back of the restaurant is up a flight of stairs. The toilets are probably up there as well.