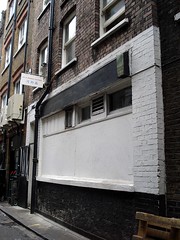 Tiny noodle factory down an alleyway in Chinatown.

As of late 2019 it's been threatened with closure due to redevelopment of the premises, but according to Eater London has been allowed to remain in place for now.

They sell fresh noodles including ho fun (wide flat noodles) and cheung fun, as well as dim sum items such as lo bak goh (radish cake) and char siu bao (and other types of bao too). According to the reviews linked below, they may also sell zongzi, but we're not sure if these are available all year round.

Their cheung fun are the type that come with dried prawns and spring onions cooked into the batter; they will do plain ones if you order them in advance, but you need to buy at least six packets, which is quite a lot. As of August 2010 they sometimes (but not always) have a few packets of plain cheung fun available "on spec" on Sundays.

Everything they sell is intended for taking home (or to a restaurant kitchen) and cooking — it's not ready-to-eat. The lo bak goh comes in a bulky slab which you need to slice and fry yourself, for example.

Accessibility: The entrance corridor is very narrow, and on my visits was made even narrower by boxes stacked up along one side. I didn't actually make it inside the factory itself, and was served in the corridor, so you probably wouldn't lose out on anything much by being served in the alleyway (assuming it wasn't raining). I can't remember how uneven the surface of the alleyway is though.