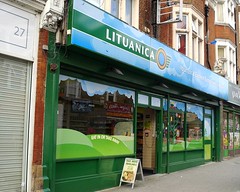 Lithuanian and Eastern European grocery shop and takeaway in Walthamstow. It's part of a medium-sized chain which has other branches in and outside London, including one in Barking.

It carries shelf-stable ingredients such as snack foods, smoked fish in jars, and pickles. There's also a fridge with things like pickled herrings, sausages, and so on. There's a small freezer unit — smaller than at other branches Kake has been to.

They do hot food to take away, and there are three or four tall stools at a counter if you want to eat in.

Accessibility: A very small step to get in. Step-free once you're in.