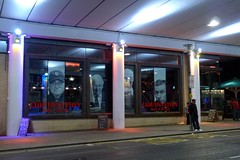 A former themed bar on Ladbroke Grove, just by the station. It has since closed to make way for a supermarket.

A recession-themed bar by Ladbroke Grove Station under the Westway, formerly known as Ion Bar, and run by VPMG (Vince Power).

This is a strange one: a political manifesto on the door photo of front door, massive photos of credit crunch hate figures on the front (Bernie Madoff, Fred Goodwin), and artwork created by University of the Arts students. There are fruit boxes with paintings of a smug Gordon Brown hanging on the wall photo, light fittings made of plastic cups photo, a bar made of cassette tapes, a wendyhouse with bean bags for seating upstairs, and crates of bulk-purchase beer lined up against the walls behind the bars.

There's some table seating downstairs and outside, as well as couches and three pool tables upstairs, though most of the floor is kept clear.

From the point of view of the visitor, most of interest will be their special offer of all drinks priced at £2.50. This covers a couple of basic draught options (Foster's, Gaymer's cider), bottled beers (Mac's Gold, Asahi, Tsingtao, Michelob, Nils, Lynx) and cider (Brothers), cocktails photo of cocktail list, wines and spirits. It turns out the house red wine is actually pretty drinkable for the price. There's a smaller bar on the upstairs level which opens later in the evening.

There are also some food options (all priced again at £2.50), with a perfectly serviceable vegetarian burger containing roasted vegetables and goat's cheese. Fries, sold separately, are served in a paper cone and are nice and crispy.

On a Tuesday evening when Ewan visited, it was mostly empty inside, with those customers who were there sitting out on the covered patio alongside the street. A DJ was playing a good selection of 80s pop, soul and R&B music at very loud volume, which may account for the emptiness inside. However, it may get busier at peak times nearer the weekend. On a Thursday evening, it was a bit more full, again with very loud music playing downstairs (mostly disco), though the table upstairs afforded a little peace.