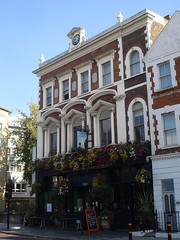 Entry is into a large space with hardwood flooring, and mismatched wooden chairs and tables arranged with plenty of space between. Mini rubber plants sit in terracotta pots on the tables, and a sideboard by the door holds Monopoly, Cluedo, and a couple of other board games. Further back is the bar, with a line of backless stools along it and more chairs and tables along the wall opposite. Patio doors open onto a decking area, and steps lead down from here to a patio, well provided with greenery.

Kake visited on a Friday afternoon in September 2014. There were three or four other customers inside and another three or four in the garden. Indie music was playing, not too loud.

The handpumps were clipped for Belleville Commonside Pale Ale, Belleville Northcote Blonde, and By The Horns Mayor of Garratt. On keg taps they had Sambrook's Battersea IPA, Camden Hells, and Camden Pale Ale. A half of lime and soda was £1.20.

A board on the wall advertised bar snacks including wasabi peanuts, smoked almonds, bread and olives, chips, charcuterie board, and a half pint of prawns.

Main meals are also served, on the interesting side for pub food photo of menu from September 2014, though we're not sure what times.

According to their website as of September 2014, they are dog-friendly.

Accessibility: Uneven ground directly outside, and a tiny step to get in. There's an accessible toilet on the ground floor, but on our September 2014 visit the route to this was blocked with a large storage box. Other toilets are down s staircase with bends and a sturdy handrail on one side all the way down. There's a ridge at the threshold to the decked part of the garden and a couple of steps to the patio part.