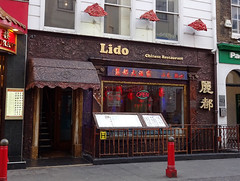 According to their website as of March 2018, dim sum is served until 10:30pm every day except Saturday.

Leon, Nick, Dean, Kake, and other Perlmongers visited for a dim sum lunch in April 2008.

Service was fine, with teapots being refilled promptly, and the dim sum menu wasn't missing any obvious favourites. The tablecloth was dirty, though, with rather a lot of pulled threads, and the lazy susan supplied for the middle of the table wasn't exactly clean either. Nick had the (plastic!) spoon for his (china) bowl exchanged because it was a little dirty.

Kake felt that the fried things were a little too greasy. Shanghai dumplings (£2) were juicy but not really soupy. Char siu cheung fun arrived cold, but everything else that was meant to be hot was hot. Kake also thought the egg custard tarts looked a little tired, as if they'd been sitting around a while, but they all got eaten by other people so I can't confirm this. It didn't help that when we made our second order (more first courses and desserts), the desserts were brought first — logically consistent with delivering everything immediately that it is ready, but not logically consistent with our eating expectations.

Rather cheaper than our normal dim sum expeditions, though, at £8/head including a little more than the auto-added service charge, and it certainly seemed we had about the same amount of food as usual. Nick would certainly go back.