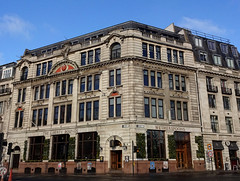 A typically-large Wetherspoons pub just on the border of the City (it takes its name from this), near Tower Hill Station.

The ground floor is relatively large, but broken up by wood and leaded-glass partitions to give several cosy hideaway areas. A relatively restrained patterned carpet on the floor carries a suggestion of fleur-de-lis. Large windows at the front let in the sunlight, but a low ceiling around the back and sides goes some way towards keeping it away again. A long bar stretches around and offers the usual huge variety of hand-pulled ales, lagers and wines that you'd expect, at reasonable prices.

There's more seating on the two storeys above, and an additional bar on the top floor. Some TVs play sport silently, and are generally well hidden.

On Ewan's visit on a Saturday evening in August 2008, the place was very busy with noisy drinkers on every level, and there was a 40 minute wait for food to arrive.

When Kake visited on a Friday lunchtime in December 2017, there was a choice of seating when I arrived around 11am, but it filled up while I was there, and by 1pm you'd have had to hunt for a seat. No music was playing, as is usual for Wetherspoons. There were 12 real ales on: ELB Quadrant, ELB Three Kings, Portobello Market Porter, Sambrook's Junction, Stonehenge Rudolph, Weltons Ho Ho Ho, and Wimbledon Copper Leaf, as well as the usual Wetherspoons standbys of Abbot Ale, Broadside, Doom Bar, Greene King IPA, and London Pride. A pint of lime and tap water (they were out of soda) was £1.20.

Food is served all day, including breakfast. In December 2017, Kake tried the chicken, leek, and pancetta pie photo. It was a true pie, fully encased in pastry, and the pastry itself was crisp and brown, sprinkled with poppy seeds for added interest. The filling was somewhat gloopy, though, and the leeks and pancetta were very sparse. The mash on the side had a substantial crust, as if it'd spent too long under a heat lamp. The peas were fine, not overcooked, but there weren't very many of them.

Service on our December 2017 visit was very indifferent, with staff seemingly attempting to get through the day by doing as little as possible; perhaps a reflection of the very touristy location.