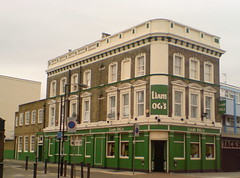 The information below is retained for people who want to know what it was like as Liam Og's.

Community Irish pub on Walworth Road. This pub is very linear with a succession of stairs up to the toilets at the back. There is only one stair to the bar though. It is quite atmospheric, with old signs and wood.

It was quiet, with old men reading papers. The television was showing horse racing, and was later turned over to the football but it was Northern Ireland playing on Sky rather than the England game (on Setanta?).