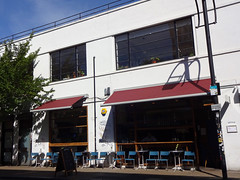 European cafe/bar/restaurant in Peckham, down the side of Peckham Rye Station.

The dining space is bare-bones, with an unfinished floor and walls painted in rather institutional-looking dark teal and green-tinged cream. Decor is limited to displays of wine bottles and LP covers. Seating for 26 is provided at square-topped wooden tables, and there's another six high stools at the window as well as pavement seating when weather allows.

Kake visited on a Tuesday morning in May 2019. There were two other customers when I arrived around 9am. Music was playing, loud enough to be annoying even though I wasn't trying to have a conversation with anyone.

Croque monsieur was available both as a whole and a half, with an optional fried egg; I went for a half with an egg (£6.50 in total) photo. The egg yolk was cooked almost to the point of total solidity, which is not my preference, and there was more cheese and less ham in the sandwich than I'd have liked. Overall I found it a bit stodgy. The salad on the side worked very well though, with the mustard-heavy dressing providing the spark of flavour that was missing from the sandwich.

Earl Grey tea (£2.50) was loose leaf, served in a teapot exactly the same size as the cup, with a strainer and thing to rest the strainer in afterwards. The leaves were good quality, supplied by the Rare Tea Company, and the staff offered me a refill of hot water without prompting (this type of tea is good for more than one brew).

A carafe of tap water was provided without me having to ask, and although the menu states that there's an optional £1 donation to charity for this, I noticed later that it was not added to my bill (though a 12.5% service charge was).

Kake's verdict: Undecided. They're doing the sort of food that's generally very appealing to me, and the staff were nice, but the loudness of the music was very off-putting.

Accessibility: A tiny step to get in, more of a ridge really. No steps to the toilet, but the cubicle could be quite a squeeze for people with longer legs (though the door opens outward, so at least one can get in without a struggle).