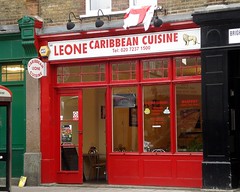 Leone Caribbean Cuisine was a small Caribbean cafe/takeaway on Tower Bridge Road in Bermondsey. It has now closed. As of September 2013, the premises are occupied by a different Caribbean restaurant called O-Tower photo.

Inside, the decor is very casual and there's seating for about ten people (including one seat at what looks like a repurposed computer desk). In good weather, they put three more seats outside on the pavement.

The menu may vary somewhat from day to day — in June 2010 Kake saw a blackboard sitting in the corner with names of dishes on it including ital (vegan) callaloo, some of them with ticks against them. The regular menu on the wall includes things like various jerked meats, oxtail, fried fish with okra, fried dumplings, patties, etc. They also do a few sandwiches, and some kind of all-you-can-eat buffet (not sure how this works, or when it's available).

Kake visited for a quick lunch on a Tuesday in June 2010. I was the only customer apart from one other person who came in for a takeaway. I went for the saltfish and callaloo (£4.30 for a small portion including rice and peas) and also had some fried plantain (£1) on the side photo. A bottle of water was 50p. The food was clearly reheated in the microwave (I heard the ding), but the callaloo at least didn't really suffer from this. The plantain went cold again quite quickly though, and there were a few hard bits in the rice. However, I liked the flavour of the callaloo (despite a few tough stalks), and would probably order it again.

Accessibility: No real step to get in, just a sort of ridge. Not sure if there's a toilet.