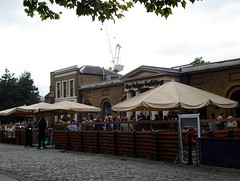 The Ledger Building is a large Lloyds No. 1 (Wetherspoons) pub in a listed building near West India Quay Station in Docklands.

It underwent refurbishment in November 2009.

The building is broadly split into two halves, with one very long room down the eastern side (which has the bar in it), as well as three other rooms on the western side of the entry corridor for drinks and diners, some designated for children. The bar has three banks of handpulls for ales (around 12 in total), and of those one has cider all the time. There are also the standard Wetherspoon's offering of kegged beers and bottles, which are much the same from the pub to pub across the chain.

The main room is carpeted and has a number of couches near the window, as well as a range of tables (high and low), and a raised seating area towards the rear. The atmosphere is generally quite pleasant for drinking or chatting to friends. Bar service is professional. The food and drink is standard to the chain, so offers no particular point of difference, but the ale has always seemed well-kept to Ewan.

There is a large outside seating area in the front of the pub, along a pedestrianised area (but with a fence), some of it covered and with patio heaters.

It gets busy at peak times, but visiting on an evening earlier in the week, Ewan has never had a problem finding somewhere to sit, so large is the building.