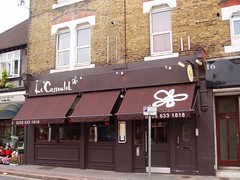 Now closed; was a French bistro in South Croydon, near South Croydon Station. As of March 2014 the premises are occupied by a Mauritian fusion restaurant called Cote D'Azur.

In July 2012, the owner of Le Cassoulet, Malcolm John, stated in a local newspaper interview that he was considering moving his restaurant out of the area, and a couple of weeks later it closed abruptly, with the name removed swiftly from the frontage photo.

According to a thread on the PutneySW15 forum, he has also closed another of his restaurants, the Fish & Grill in Putney. The Croydon branch of Fish & Grill rebranded to Brasserie Vacherin in June 2013, but remains open, as does Le Vacherin in Chiswick.

The restaurant opened in January 2008 in Croydon, a couple of minutes walk from South End, Croydon's highest concentration of restaurants. As of November 2008, after almost a year of service, the restaurant had settled in well and seemed to be doing reasonably good business despite the recession - early service saw the restaurant half full, and they were only taking bookings for sittings at 18:30 and 21:00 at weekends. The restaurant has cemented itself as the most upmarket in Croydon, and one can only hope it continues to do well.

The following information relates to a visit by elvum during March 2008:

From the starters menu, a warm salad of scallops with black pudding and bacon (£7) was well-balanced and flavoursome. A goat's cheese tartlet lacked cheese and was a little generous with the cream, but was perfectly pleasant. Advancing to the main courses, the eponymous cassoulet (£14) came in its own pot and included pieces of duck confit, belly pork and garlic sausage, topped with breadcrumbs (which some decry as heresy, but made it no less tasty). It was perhaps a little more liquid than is common, but had an excellent earthy garlic flavour. Boeuf Bourguinonne (£14) consisted of a slightly sweet beef and wine reduction, in which swam generous chunks of tender beefs, smoked bacon, onions, mushrooms and carrots — each of which was perfectly (and hence presumably independently) cooked. It came with pureed potatoes. A side-order of dauphinoise was cheesy and unctuous, the former due to grilled Vacherin cheese on the top (which again, some decry as heresy).

The creme brulee (£6) was a generous portion, well-flavoured, with plenty of vanilla seeds in the custard, and a good layer of caramelised sugar on top, although the dish arrived cold and the sugar was ever so slightly soft. The cheese plate was a good mixture of hard, soft and goats' cheeses - if anything perhaps a little cold and under-ripe, but served with a good selection of accompaniments: bread, hard wheat and rye biscuits, celery and half a fresh fig (£7). The restaurant has a good selection of dessert wines - we had a fruity Baron Phillipe Sauternes, and a spicy, caramelly Pineau des Charentes.

On a follow-up visit in November 2008, the menu had changed slightly: the boeuf bourguinonne had disappeared, as had a ham hock starter not reviewed here. A confit of pork belly with puy lentils and parsnip puree was delicious, as was a Valrhona chocolate fondant.

Service is polite, attentive and knowledgeable. The restaurant takes bookings by telephone, or online via their website (provided by opentable.com). Three courses with wine for two people came to £120, and we felt that that was good value. At the end of our meal, a taxi was procured for us in less than five minutes (although be prepared to give fairly precise directions to the driver, if your reviewers' experiences are anything to go by).

A menu change in March 2008 may render some of the reviews below out of date. Certainly there was, sadly, no sign of the free nibbles reported by Andy Hayler.