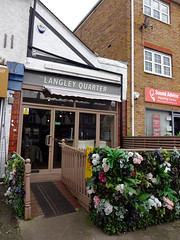 Small cafe in Eden Park, tucked away in a small parade of shops near the station.

Inside are seats for just 16 people, squeezed in at the four sturdy wooden tables that occupy half the room. A large service counter fills the other half, dominated by a large coffee machine and backed by shelves holding bottles of wine, a small selection of spirits, and several types of plant milk. Cakes sit under clear domes on the counter, between an Asahi keg tap and an urn of help-yourself tap water.

The walls are cream paint above light brown wood panelling, and bare floorboards lie underfoot. Out the front is a small decking area with additional seating for another six or so.

Kake visited on a Tuesday lunchtime in February 2020. There were half a dozen other customers when I arrived a little before noon, and music was playing quietly.

Smoked salmon and poached eggs with avocado on toast (£8) photo took just over half an hour to arrive, which was a bit confusing given that it primarily involved assembly rather than cooking, and the only other things served during that time were a couple of coffees.

Another confusing aspect was the provision of only one small piece of toast, which wasn't really enough to go with everything else. The avocado was properly soft, but also brown in places. The salmon was not high quality, but at least there was plenty of it. The poached eggs were fine, with runny yolks and properly set whites. The standard bagged salad leaves on the side were both unnecessary and a little tired. Overall it was OK, but I wouldn't order it again — I'd probably have been happier with simple poached eggs on toast.

Kake's verdict: The menu is fairly unimaginative and the execution wasn't great, but the service was friendly and it felt like a nice enough place to sit with a laptop for a few hours.

Laptop-friendliness: They have WiFi (ask staff for the network name and password), though it was fairly slow on our visit. At least one of the tables has plug sockets next to it.

Child-friendliness: They have at least one highchair, and there were a baby and toddler in during our visit.

Accessibility: A ramp to get in, with a very wobbly handrail alongside. No steps to the toilet, though it can be a bit of a squeeze to get in if there are people sitting at the table immediately in front of the door.